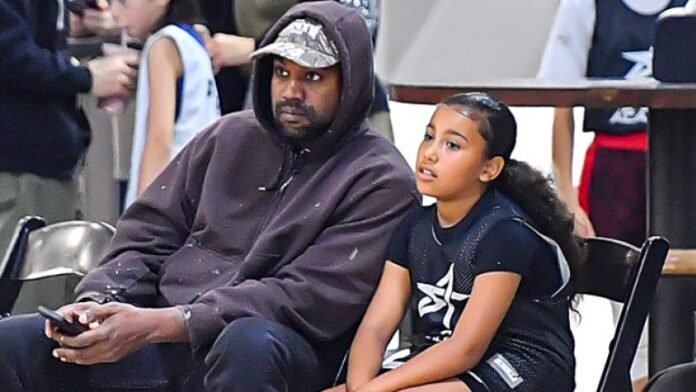 Kanye West, 45, was photographed arriving at Nobu Malibu with wife, Bianca Censori, 28, on the evening of Jan. 22. Shortly after Kanye and Bianca arrived, the rapper’s daughter, North West, 9, was dropped off with a friend by her security team. North appeared to be joining her dad and new stepmom for dinner at the celeb hotspot, in photos you can see here. She wore a pair of ripped black pants and a black hoodie for the outing, pairing her look with her hair styled in long braids, colored pink and white.

Kanye and North’s mom, Kim Kardashian, split in Feb. 2021, became legally single about a year later, and finally had their divorce finalized in Nov. 2022. On Jan. 13, it was reported that Kanye had recently secretly married Bianca, who is noticeably a Kim K look-alike. Bianca has worked at Kanye’s Yeezy brand for several years, and Ye was seen wearing what appeared to be a wedding ring on his left hand after the rumored nuptials. However, it does not appear that the pair’s marriage is legal with the government, as they don’t seem to have filed for a marriage certificate.

While Kim and Kanye were on amicable co-parenting terms in the months that first followed their split, things started to get more difficult after Kim started dating Pete Davidson in the fall of 2021. She and Pete split in July 2022, but Kanye took his controversial behavior to another level in the following months. The rapper publicly made antisemitic comments on a number of occasions, leading him to get dropped by some of his biggest collaborators, including Adidas.

Share
Facebook
Twitter
Pinterest
WhatsApp
Previous articleTu Jhoothi Main Makkaar Trailer Out! Ranbir Kapoor & Shradha Kapoor Are Here To Tell You How To Break Up By Actually Not Breaking Up
Next articleMohamad Ghayad makes his way of building a legacy at FIFA world cup Qatar 2022